Anxious for Nothing: Finding Calm in a Chaotic World Hardcover Book ~ Max Lucado

When it comes to anxiety, depression, and stress-related illnesses, America is the frontrunner. Thankfully, there’s a practical prescription for dealing with these issues. Anxious for Nothing, the most recent book from New York Times bestselling author, Max Lucado, provides a roadmap for battling with and healing from anxiety.

Does the uncertainty and chaos of life keep you up at night?

Is irrational worry your constant companion?

Could you use some calm?

If the answer is yes, you are not alone. According to one research program, anxiety-related issues are the number one mental health problem among women and are second only to alcohol and drug abuse among men. Stress-related ailments cost the nation $300 billion every year in medical bills and lost productivity. And use of sedative drugs like Xanax and Valium have skyrocketed in the last 15 years. Even students are feeling it. One psychologist reports that the average high school kid today has the same level of anxiety as the average psychiatric patient in the early 1950s. Chances are, you or someone you know seriously struggles with anxiety.

Max writes, “The news about our anxiety is enough to make us anxious.” He knows what it feels like to be overcome by the worries and fear of life, which is why he is dedicated to helping millions of readers take back control of their minds and, as a result, their lives.

Anxious for Nothing invites readers to delve into Philippians 4:6-7. After all, it is the most highlighted passage of any book on the planet, according to Amazon:

Do not be anxious about anything, but in every situation, by prayer and petition, with thanksgiving, present your requests to God. And the peace of God, which transcends all understanding, will guard your hearts and your minds in Christ Jesus.

In the characteristic tone of his previous books like You’ll Get Through This and Fearless, Max guides readers through this Scripture passage and explains the key concepts of celebration, asking for help, leaving our concerns, and meditating. He has also written a companion children’s book I’m Not A Scaredy Cat showing kids, in a fun way, that godly bravery can get them through any fears or worries.

Stop letting anxiety rule the day. Join Max on the journey to true freedom and experience more joy, clarity, physical renewal, and contentment by the power of the Holy Spirit. Anxiety comes with life. But it doesn’t have to dominate your life.

In just under two decades of writing, Max Lucado has accomplished more than most writers hope for in a lifetime. Most of his books have appeared on one or more best seller lists, including those published by the “New York Times,” “USA Today,” “Publishers Weekly,” and the Christian Booksellers Association (CBA). Aside from hardcover books, Lucado’s writings have also been published as children’s books, videos, CD-ROMs, DVDs, music CDs, mass paperback booklets, apparel, giftware, bookmarks, calendars, study Bibles, workbooks, curricula, and plush products. In spring 2003, Hallmark/Dayspring Cards launched a new gift card line featuring excerpts from Lucado’s writings–and has already sold more than one million cards.

All this success has drawn more than a little attention to a previously low-profile Texas author and minister. Lucado has been featured in a wide range of media, including “USA Today,” “Larry King Live,” and “NBC Nightly News.” He has spoken at the National Prayer Breakfast before the President of the United States. He has traveled with internationally renowned musicians as a special speaker on their music tours, such as the highly successful “Come Together & Worship Tour” (sponsored by Chevrolet) with Grammy Award-winning artists Michael W. Smith and Third Day.

Journey to the Top
Lucado was born in 1955 in San Angelo, Texas, and raised in Andrews, Texas, the youngest of four children. His father was an Exxon oil field mechanic who, Lucado remembers, always smelled of grease cleaner. “It makes it easy for me to see a God who is loving and kind–because my dad was,” he says. His mother was a nurse who grew up working in the cotton fields.

Lucado went through a period of rebellion against his parents’ values and their God during his teens and into college. But it wasn’t long before he found himself drawn back to his roots, back to God. He married, spent time serving as a missionary in Brazil, and returned to the States, where he began working as a church minister and writing on the side.

Secret to Success
From all accounts, Max Lucado is not a man consumed by sales, awards, and achievements. He often turns down media interviews since they impede on family and ministry commitments. He spends the bulk of his week serving as senior minister at Oak Hills Church in San Antonio, Texas. And he is truly surprised by his own success–more impressed by his one-in-a-million wife and three amazing daughters than by his successful writing career. 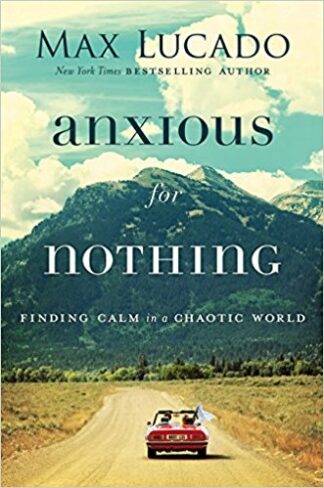 You're viewing: Anxious for Nothing: Finding Calm in a Chaotic World Hardcover Book ~ Max Lucado
Buy on Amazon