Proof of Heaven: A Neurosurgeon’s Journey into the Afterlife Book

The #1 New York Times bestselling account of a neurosurgeon’s own near-death experience—for readers of 7 Lessons from Heaven.

Thousands of people have had near-death experiences, but scientists have argued that they are impossible. Dr. Eben Alexander was one of those scientists. A highly trained neurosurgeon, Alexander knew that NDEs feel real, but are simply fantasies produced by brains under extreme stress.

Then, Dr. Alexander’s own brain was attacked by a rare illness. The part of the brain that controls thought and emotion—and in essence makes us human—shut down completely. For seven days he lay in a coma. Then, as his doctors considered stopping treatment, Alexander’s eyes popped open. He had come back.

Alexander’s recovery is a medical miracle. But the real miracle of his story lies elsewhere. While his body lay in coma, Alexander journeyed beyond this world and encountered an angelic being who guided him into the deepest realms of super-physical existence. There he met, and spoke with, the Divine source of the universe itself.

Alexander’s story is not a fantasy. Before he underwent his journey, he could not reconcile his knowledge of neuroscience with any belief in heaven, God, or the soul. Today Alexander is a doctor who believes that true health can be achieved only when we realize that God and the soul are real and that death is not the end of personal existence but only a transition.

This story would be remarkable no matter who it happened to. That it happened to Dr. Alexander makes it revolutionary. No scientist or person of faith will be able to ignore it. Reading it will change your life.

“Eben Alexander brings a unique perspective to the sacred world combining a glorious, personal vision of spiritual consciousness with patient, insightful scientific inquiry. “Proof of Heaven” is a compelling story of what may lie ahead for all of us in the life beyond this one. We have nothing to fear.” –Allan J. Hamilton, MD, FACS, author of “The Scalpel and the Soul” and “Zen Mind, Zen Horse”

“”Proof of Heaven” is more than just an awe-inspiring account of a profound encounter with spiritual reality. Dr. Alexander’s neuroscience career taught him that near-death experiences are brain-based illusions, and yet his personal experience left him dumbstruck. His honest struggle to make sense of this unforgettable journey is a gripping story, unique in the literature of spiritual experiences, that may well change how we understand our role in the universe.” –Bruce Greyson, MD, co-editor of “The Handbook of Near-Death Experiences: Thirty Years of Investigation”

“I can highly recommend this important book that has the potential to break many scientific taboos.” –Dr. Pim van Lommel, cardiologist, author of “Consciousness Beyond Life: The Science of the Near-Death Experience”

“Dr. Eben Alexander’s near-death experience is the most astounding I have heard in more than four decades of studying this phenomenon. [He] is living proof of an afterlife.”–Raymond A. Moody, M.D., Ph.D., author of Life After Life

Eben Alexander, MD, has been an academic neurosurgeon for the last twenty-five years, including fifteen years at the Brigham & Women’s and the Children’s Hospitals and Harvard Medical School in Boston. He is the author of Proof of Heaven and The Map of Heaven. Visit him at EbenAlexander.com.

Dr. Eben Alexander III has been an academic neurosurgeon for the last 25 years, including 15 years at the Brigham & Women’s and the Children’s Hospitals and Harvard Medical School in Boston. Over his academic career he authored or co-authored over 150 chapters and papers in peer reviewed journals, and made over 200 presentations at conferences and medical centers around the world. He thought he had a very good idea of how the brain generates consciousness, mind and spirit.
A week spent in coma due to severe gram-negative bacterial meningitis in November 2008 changed all of that forever. The extraordinary spiritual journey he experienced that week completely defied everything he thought he knew about the brain and consciousness, supporting an alternative view in which consciousness is fundamental in the universe, and creates all else that exists! His original journey was portrayed in the blockbuster international bestseller, Proof of Heaven, followed by The Map of Heaven (describing the commonality of such experiences)
The much-anticipated sequel to Proof of Heaven, entitled “Living in a Mindful Universe: A Neurosurgeon’s Journey into the Heart of Consciousness,” came out 17 October 2017. It follows his extraordinary journey of discovery since awakening from coma, and mirrors the profound paradigm shift coming to the world’s scientific community at large, all about a deeper understanding of the fundamental nature of consciousness itself.
His story offers a crucial key to the understanding of reality and human consciousness. It will have a major effect on how we view spirituality, soul and the non-material realm. In analyzing his experience, including the scientific possibilities and grand implications, he envisions a more complete reconciliation of modern science and spirituality as a natural product.
He has been blessed with a complete recovery, and has written three books about this most powerful, life-changing story. Simon & Schuster published his first book, entitled “Proof of Heaven: A Neurosurgeon’s Journey into the Afterlife” on October 23, 2012. It spent more than 40 weeks at the number 1 position on the NYT Bestseller list, was on that list for almost two years, and has been published in over 30 foreign countries.
For more information, including video links and reading list, visit http://www.ebenalexander.com 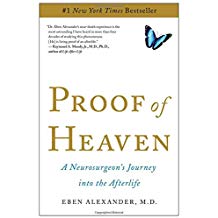 You're viewing: Proof of Heaven: A Neurosurgeon’s Journey into the Afterlife Book
Buy on Amazon